I found this pattern, called Swirl Hat (Ravelry link) on Rav and decided I wanted to make it on the loom. It’s super cute. I didn’t do the decreases for the top because I was being a bit lazy, but I converted the main pattern for the swirl, and knit that. I used my 72 peg Bufanda 3/8″ loom, and the pattern called for 72 stitches to be cast on. Any loom with a peg number that is a multiple of 8 will work, and I have a small head, so I recommend more pegs (or bigger gauge, peg spacing). Here’s how I did it.
What you need

I’d say this pattern is advanced beginner or intermediate due to moving pegs around.
Cast on a multiple of 8 pegs using the cast on of your choice and join in the round.
Place a stitch marker on every 8th peg (1, 8, 16, etc, and include the last peg before peg 1) This isn’t necessary, but it makes life easier. 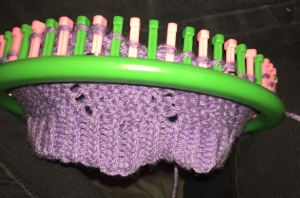 Row 1: K2, YO, K4, K2Tog (8 pegs) repeating all the way around. The stitch marker will be on the K2Tog (knit two together)
Row 2: Purl all
It takes a bit for the pattern to start showing. 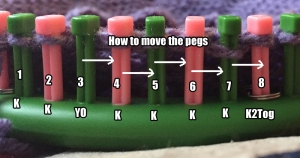 A diagram of the 8 peg repeat in row 1 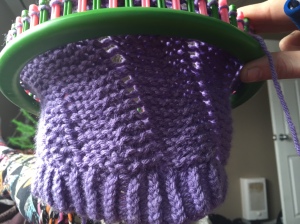 This involves moving pegs around. So here’s what you do:

Now, peg 8 will have 2 loops on it, and peg 3 will be empty. Knit the first two pegs, yarn over (bring the yarn in front of, but don’t wrap around) peg 3, knit the next 4 pegs, and knit peg 8’s two loops as it were one. Start again on the next 8 pegs.

Repeat rows 1&2 until the hat fits. I often just try it on, loom and all. Cast off using the gather/drawstring method. To do this, wrap the working yarn around the loom twice, and cut it from the skein, and attach it to a tapestry needle. Take the needle, and bring it up and through the loop on peg 1, and remove peg one from the peg. Repeat this on the rest of the pegs, until there are none left on the loom, and then tighten. Weave in your ends. There may be a small hole at the top of the hat, so take the tapestry needle and sew it together, and tie it off on the inside of the hat. Admire, you’re done!